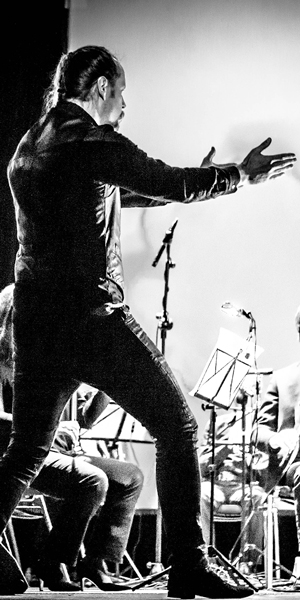 … did the academies of music and forgot.

He lives in Graz until the political situation drives him away.

He composes contemporary and cinematic sound.

He performs live with Indian instruments and synthesizers in experimental setups. 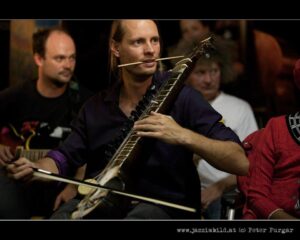 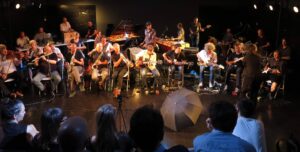 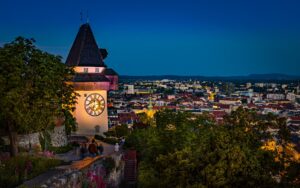 In 2012 he was awarded the State grant by the Austrian Government, also in 2012, he won the 1st prize in the Gustav Mahler composition competition.

Performances at Forum Alpbach in 2018 and opening of the Styriarte in 2022.

Denovaire lives and works in Graz.

[ 2017 ]
Publishing of the “esraj handbook”, a teaching book for the rare Indian instrument esraj.
Performance in Innsbruck with TENM
Performance together with Dancing Shiva and the Philharmonic Orchestra Graz in the Operahouse/Graz.
Commission for “Carmina Nova” from Vokalforum Graz and multiple performances plus CD Recording
Teaching at Kunstuniversität Graz
[ 2016 ]
Performances of Ensemble Schallfeld in Milano and Rome
Performance Concert “dystopian pleasure” for retro-futuristic ensemble with szene instrumental at Forum Stadtpark/Graz
Performance of  “music for transition” in Vienna and Klagenfurt
Performance in Innsbruck with TENM at Harry Triendl’s “Zyklus IV”
[ 2015 ]
Performances of Schallfeld Ensemble in Brussles, Vienna and Graz
[ 2014 ]
Radio Portrait Concert in the Slovenian Radio (RTV SLO)
Performance at im musikprotokoll/ Steirischer Herbst within “Konfrontationen 5”
[ 2013-2016 ]
Theater works with Markus Jastraunig and Carla Almeida
[ 2013 ]
Performances of Max Brand Ensemble in Färöer and Denmark Performances of Ensemble Zeitfluss in Minoritensaal/ Graz;
Performance for esraj, samples and multiple speakers “Thokar #8” at Essl Museum / Vienna;
Music theater “mücken sind kernobst” with UniT/Graz, Sandra Schüddekopf and szene instrumental
Assistance for Bernhard Lang
[ 2012, 2014, 2016, 2021 ]
Participation in international music programs with v:nm
[ 2012 ]
“primary emotions” in Graz, Feldkirch and Salzburg, music for theater with Veza Fernandez, Alina Stockinger and Alexa Zach
Performance of “wolfpack” at Musikforum Viktring as the winning entry of Gustav Mahler composition competition
multiple music album productions
[ 2011 ]
Work for choirs and ensemble “muata erdn” with 100 musicians in Mumuth/Graz and Gleisdorf
[ 2010-2014 ]
Workshops with students within „Konfrontationen“ of  School authority Styria
[ 2010, 2012, 2013 ]
Performances of  „Grandvizier’s Chest“ , a avantgard/rock music production for 14 musicians at Porgy&Bess Vienna and Steyr and twice in Graz
[ 2008-2014 ]
Creation and direction of “Indiasphere”, a festival for indian music and Dance in Graz
[ 2006 & 2007]
“Steirischer Herbst” within the projects „Klangwege 2006“ and participation in the “Künstleratelier Dachstein-Cult“;
Performances at Stiftung Starke/Berlin and the Austrian Cultural Forum/ Berlin

vocals, esraj and synths venturing out on an exceptional journey

Be water my friend Bruce Lee

video credits in the respective descriptions